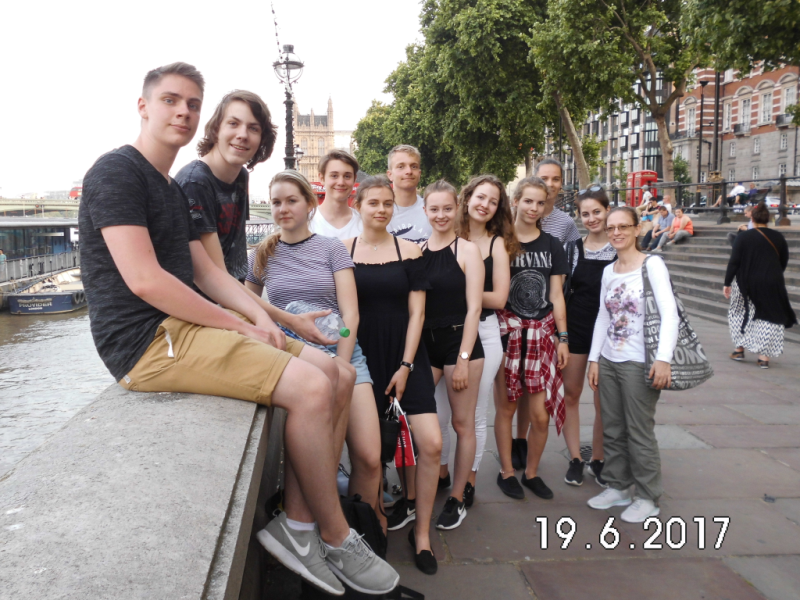 It was the 19th of June when we as the English advanced course met very early at Dresden Central Station to take the bus to Berlin. In Berlin we took the airplane to London. Having arrived in London, we had to notice th time change, the left-hand traffic and the surprisingly high temperatures.

After 90 minutes by train we arrived in London, took the tube and walked to our hostel “Hyde Park View”. The rooms were, as expected, not very big. But the hostel was near Hyde Park, so after opening our little suitcases we went to a supermarket to get some drinks and went into the park. We all were tired and the heat intensified our tiredness.

The special features of the hostel? You can open the windows just a little bit and the shower gives just ice-cold water. Sounds good to stand the heat, but it was a little bit too cold…

During the next days we could explore London more intensively. On the first day we went to the Sky Garden, where you have a nice view of the London City and which is in contrast to the London Eye for free. We could visit the Tate Gallery and in the evening we saw platform 9 ¾ at King's Cross Station.

The next morning was planned to see the Changing of the Guard at Buckingham Palace, but then we were informed, that the Queen would leave her house to open Parliament. So we went there already two hours earlier and saw the hat of the Queen for a second. It was early, but it was worth it.

Due to our tasks we had got before the trip, we had to visit certain places to get informed about certain topics as traffic, arts, history or crime. We had very much free time, so we could visit the whole of the city, mostly by foot. Never have we walked as much as in these five days, but it was very nice and you never walked alone. So we could go to Oxford Street, Piccadilly Circus or Trafalgar Square.

One evening we went to the musical “Thriller” about Michael Jackson’s life with his music. As it was an educational trip, we also had to enlarge our knowledge. We had talked about Shakespeare and his writings a lot in the 11th grade and now as the big final of the year and our trip to London we went into the Globe Theatre. There we had a theatre workshop in the morning and we could see the play “Romeo and Juliet” live in Shakespeare's Globe Theatre.

On 23rd June it was time to say goodbye, instead of taking the underground back, we took the typical red double-decker bus at about 5:30 a.m. and went through the whole city back to the station. There we took the train to London Stansted and then flew back to Germany. The bus took us safely back to Dresden where we arrived at noon.

It was a very nice trip to London, but we were also lucky with the very high temperatures and the sunny weather every day.

As a conclusion just one more piece of advice: Drink as much as you can of the juice you get for breakfast, it is the best drink you have ever had! (irony - off)